Before the Surgical Day

After the consultation, the surgical date is scheduled. The patient is given pre-operative instructions and a prescription for a prophylactic antibiotic. A homeopathic regimen to improve post-operative healing is also suggested. On the day of surgery, the prospective area to be treated is again discussed, the area is outlined with a grease pencil, and photos are taken. The donor hair is clipped to a 2mm length, leaving the hair above and below the donor area at the original length the patient usually wears, in order to allow for easy post-operative camouflage. The pre-operative instructions can be viewed by clicking here. The morning of the surgery the patient is given valium and an analgesic to minimize any discomfort and counteract some of the side effects of the local anesthetic. The donor area and the recipient area are anesthetized with a local anesthetic. The injections are performed using a very small gauge needle similar to an acupuncture needle. The anesthetic solutions are prepared in a manner which results in a pH very close to neutral, this minimizes or eliminates the stinging sensation normally experienced with local anesthesia. The majority of patients report that the anesthesia is generally more easily tolerated than their average trip to the dentist. Patients, who have severe anxiety with respect to anesthesia, can opt to have a board certified anesthesiologist administer conscious sedation. An anesthesiologist is also required to be present in cases where medical clearance is obtained, but the patient has had some recent change in cardiovascular or neurological health.

The size of the donor to be removed is determined by the density in the region, the scalp laxity, the head circumference, the area to be treated, as well as other variables. The surgeon removes an elliptical shaped donor area with either a single or double bladed scalpel. Great care is exercised to ensure that there is minimal transaction of the follicles during this stage of the procedure. Closure of the wound is performed using vicryl sutures which are removed eight to twelve days post-operatively. Patients are usually seen four to five days after surgery to ensure that the wound is healing perfectly and the patient is following the post-operative care appropriately. The average scar is approximately 1mm wide or less, and is difficult to find buried under the remaining rim hair – in many cases it is virtually undetectable. In each subsequent surgery the original scar is removed as part of the new donor area, thus leaving only one scar regardless of the number of sessions performed. The trichophytic technique is utilized to camouflage the scar completely in patients having their last “planned” surgery, with significant hair/scalp color contrast, previous surgery demonstrating “poor healing”, and for patients wishing to wear very short hair styles. 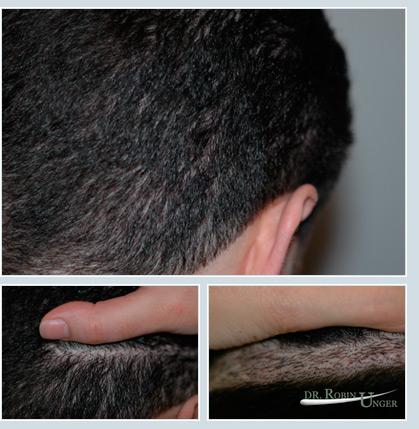 The majority of surgeries performed by Dr. Robin Unger are follicular unit transplant (FUT) surgeries, however in a small percentage of cases the decision is made to utilize larger grafts including double follicular units (DFU), triple follicular units (TFU), slot grafts, and even small round grafts in retrofit cases. Instructions are given to the technicians regarding the size of graft required. Follicular unit grafts are divided according to the number of hairs and the hair texture. The FU naturally occur with varying number of hairs, which differs from patient to patient as well as within the actual donor strip. In general 10-15% of the FU occur as single hair units, the majority are 2-3 hair units, and the balance is composed of larger FU and follicular families (FF) with more than 3 hairs. The finest single hair grafts will be used in the hairline zone, while the larger FU are utilized to create density in strategic areas.

The technicians begin by “slivering” the donor strip into slices which are one FU wide – in a manner similar to slicing a loaf of bread. The “slivers” are then dissected into the individual grafts. Throughout the entire process the tissue is kept moist, and the prepared grafts are transferred to a ceramic dish filled with a storage solution, that rests upon a cooling dish filled with ice. The handling of the grafts is exceptionally important to their survival, and in Dr. Unger’s office the graft preparation process is carefully monitored. Great care is also taken to ensure follicles remain intact, utilizing varying methods of magnification based on the technician’s need. These include microscopes, loupes, and individualized glasses for magnification.

A constant dialogue is maintained between the surgeon and the technicians to be certain that individual patient characteristics are taken into consideration. Dr. Unger’s background as a technician, prior to learning the surgical process, enables her to be particularly attuned to the issues which can arise during graft dissection. The size of the recipient sites are varied depending on the size of the grafts yielded by the tissue, the elasticity of the scalp, the texture of the tissue, and even the “slipperiness” factor encountered during graft placement. Early on in the process of recipient site creation, the grafts are tested to ensure proper fit and adjustments in preparation are made. The prepared grafts undergo regular quality control checks. This is just one of the variables which has ensured excellent results in hair survival in Dr. Unger’s patients. 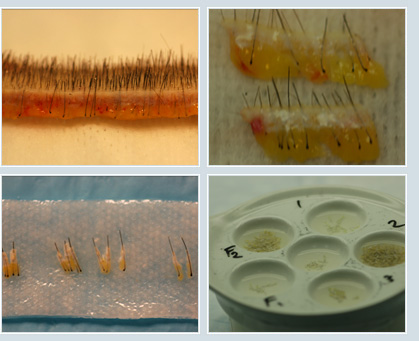 Above photos show the initial strip after removal, the slivers separated from the strip, the individual follicular units, and the storage dish with labeled wells resting upon an ice filled container.

The recipient sites are created utilizing either small needles or blades cut to size. As previously mentioned the size of the site utilized is influenced by many factors, the smallest size site into which the graft can easily be placed is created in a pattern which follows the direction of the existing hair. The hairline is created with 20G sites and macro- as well as micro- irregularities are produced to create a natural appearance to the hairline. 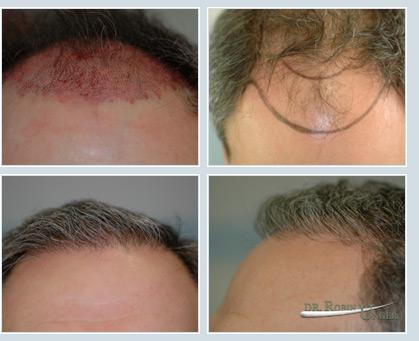 Photo of hairline pattern, prior to surgery, and nine months later

Behind the hairline the flow continues and sites are made with 19G or 18G needles, with irregularities embedded in the actual pattern of the sites as well as those dictated by the angle and direction of the existing hair. In cases where there are not even vellous hairs to direct the surgeon, she uses the pattern of the hair further posterior to ascertain a “flow” which indicates the direction of the anterior hairs. A natural final appearance is vitally dependent upon this directionality. 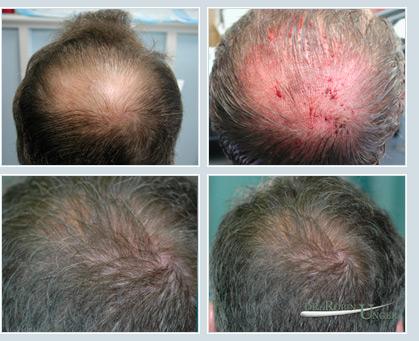 One session of FUT creates a pattern which is natural and covers the area with moderate density. Further surgeries can be performed in the same area in the future to increase density if so desired. Dr. Unger’s goal is to create a natural appearance with the minimum number of hairs that satisfies the patient’s density objectives. This conservative approach will enable the doctor to treat more of the affected areas over the patient’s lifetime and ensure a “reserve” of grafts for unusual cases where the limits of the hair loss exceeded those predicted early on in the patient’s course of treatment. The majority of Dr Unger’s patients begin treatment in early stages of hair loss, thus the hair can be replaced gradually as it is lost, keeping ahead of any obvious signs of thinning to outside observers. 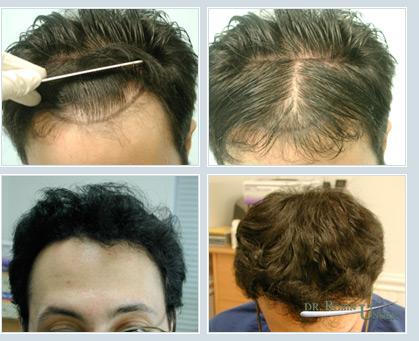 Photos of a patient with early Male Pattern Baldness (MPB), before and after one surgery. It is clear that existing hair was preserved and density significantly increased.

Women are treated with a mixture of grafts in most cases. Generally the area to be treated is thinning but is not completely alopecic, and thus DFU and TFU can help to create more volume, while FU are still utilized in the hairline and part zones. 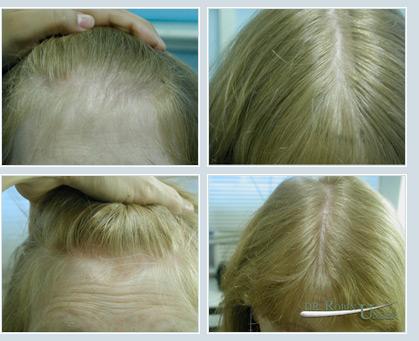 Patient with relatively common female hair loss, before surgery and 11 months after one surgery. 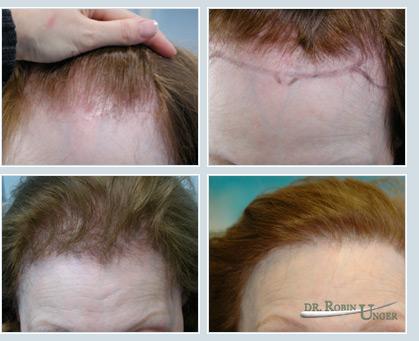 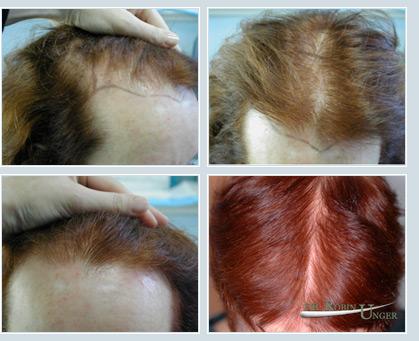 Photos of a woman with relatively early hair loss, and the same patient after one surgery.

Grafts are placed smoothly and carefully into the sites, and sit flush with the skin at the end of the procedure. The technicians in Dr. Unger’s office are exceptionally diligent and skilled and the entire process is continuously monitored by the doctor. Each step of the surgery is important to the survival of the grafts and the final cosmetic results. 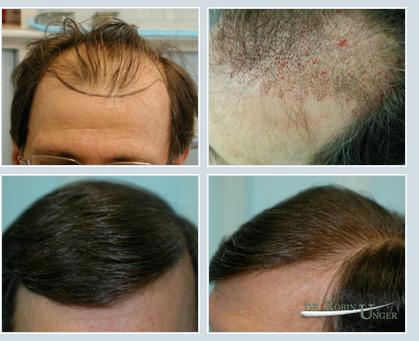 Photos showing a patient before surgery, with grafts in place (flush to skin) and 10 mths later.

“Can only say the nicest things about Dr. Unger. She makes you feel totally comfortable from the minute you meet her- you feel her support, kindness, as well as her expertise. She and the staff do all they can to help the situation. Everyone in the office is professional and kind. I highly recommend her!”
Julie R